Elissa is Professor and Vice Chair of Graduate Studies in the Department of Microbiology, Immunology, and Molecular Genetics at UCLA. She is also Home Area Director of the Immunity, Microbes, and Molecular Pathogenesis (IMMP) graduate program. Elissa received a BA from Williams College, where she majored in biology and chemistry. She received her PhD in neuroscience from Yale University, and then did her postdoctoral work at Caltech. Her lab at UCLA studies the sensory behaviors of free-living and parasitic nematodes. When not doing science, Elissa enjoys reading and spending time with her family.
​
​ 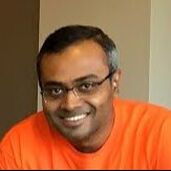 Originally from India, Navonil received his BS in Biochemistry and MS in Biotechnology from University of Calcutta, India. He received his PhD in Neurobiology from U Mass Medical School, where his thesis work focused on neuropeptide signaling mechanisms underlying innate and adaptive behaviors in C.  elegans. In the Hallem lab, Navonil seeks to understand the neural basis of CO2 response in skin-penetrating nematodes and C. elegans. Navonil spends his free time reading, watching movies, cooking, and exploring national parks.
​ 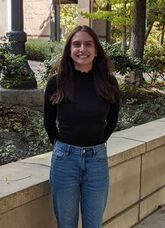 Ava is an undergraduate student majoring in Biology. She is from Ontario, California. In the Hallem Lab, Ava is studying carbon dioxide responses in C. elegans. Ava is involved in campus organizations such as Donation of Tissues and Organs. In her free time, Ava likes to play tennis, paint, and play guitar. 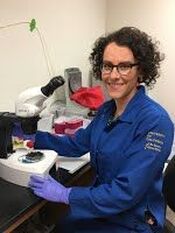 Astra Bryant, Ph.D.
Postdoctoral Scholar
​
Originally from the SF Bay Area, Astra is a postdoctoral fellow studying the neural mechanisms underlying thermosensation in soil-transmitted helminths. She earned a BA in Biology from Bryn Mawr College, and a PhD in Neuroscience from Stanford University. Before joining the Hallem lab, Astra worked on a wide array of topics in systems and circuits neuroscience. Astra is a founding member of the science communication group NeuWrite West. Outside of the lab, Astra enjoys cycling, playing softball, and painting the Pacific Ocean.
​ 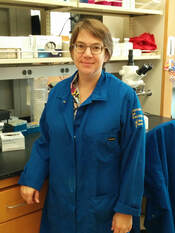 Michelle earned a PhD in Parasitology at the University of Pennsylvania, where she studied the genetics of Strongyloides. In the Hallem Lab, she focuses on developing genetic tools to investigate the neurobiology of Strongyloides. Michelle’s non-science interests include sewing, cycling and spending time at the beach. 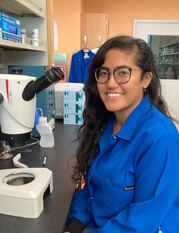 Originally from Lancaster Pennsylvania, Damia earned her B.S. in Biology at Millersville University of Pennsylvania, where she studied nematode development in Rhabditophanes diutinus and the genetics of sex determination in Strongyloides stercoralis. Here at UCLA, she is a Ph.D. student in the IMMP home area of the MBIDP. In the Hallem Lab, she works on elucidating the neural and molecular mechanisms regulating host-seeking behaviors in parasitic nematodes. When she isn’t poking at worms, Damia enjoys reading, spending time with her dog, and practicing traditional Japanese archery.
​ 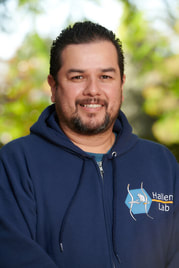 Ricardo was born and raised in San Diego. He earned his B.A. in Biology and Chemistry at Point Loma Nazarene University. After college, Ricardo worked as a research tech and lab manager. He performed research on tumor vascular biology, innate immunity, and corneal biology. He is a PhD student in the MCIP Program, and is elucidating the neural basis of CO2 response in C. elegans. Ricardo plans to become faculty at an undergraduate-serving university, with a focus on helping students from underserved communities achieve their higher education goals. Outside of the lab, Ricardo enjoys being a dad to his two boys, gardening, surfing, and doing multiple DIY projects around the house.
​
​
​ 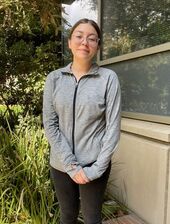 From the LA County city of Bellflower, Aracely is an undergraduate student majoring in Molecular, Cell, and Developmental Biology. In the Hallem lab, Aracely is studying the responses of C. elegans to carbon dioxide. Aracely loves spending time with her family and friends, and volunteering within the community. Aside from academic and research endeavors, Aracely enjoys reading classic novels, going on runs, listening to music, and writing poetry. 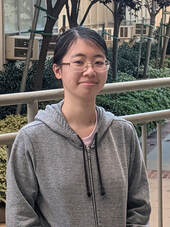 Cindy is a Bay Area native from San Jose, CA. She is currently majoring in Microbiology, Immunology, and Molecular Genetics and minoring in Asian Languages at UCLA. In the Hallem lab, Cindy is studying the mechanosensory behaviors of parasitic nematodes. Cindy frequently volunteers in her free time and is involved in student organizations such as the Bruin Polyglot Society. Outside of school, she enjoys learning languages, listening to music, doing jigsaw puzzles, and folding 3D origami models. 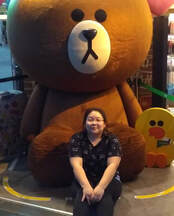 Born and raised in LA County, Tiffany earned a BA in Fine Arts from UCLA. Preceding undergraduate courses, Tiffany began her career at UCLA working in a Drosophila lab and has since been employed at UCLA for more than 12 years. As manager for the Hallem Lab, she makes sure everyone is able to get the tools they need to conduct their research. Leisurely interests include creating art, assembling crafts, collecting toys, and watching television series or movies. 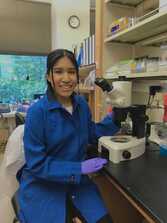 Hailing from San Marcos, CA, Patricia earned her BS in Biochemistry and Molecular Biology at UC Santa Cruz, where she studied the mechanisms of early spliceosome assembly. She left behind the giant redwoods and the RNA world to return to sunny SoCal, where she is now a PhD student in the IMMP Home Area of the MBIDP.  Her research aims to elucidate the neural basis by which skin-penetrating nematodes use salt chemosensation to locate and infect hosts. When she isn't hanging out with her fellow nematode enthusiasts, you can find Patricia vibing to music, volunteering with mutual aid organizations, expanding her taste palate, and caring for her plants. 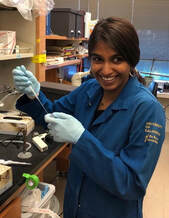 Ruhi received her B. Tech in Biotechnology at Anna University in Chennai, India, where she was born and raised. She earned her Ph.D. in Biological Chemistry at UCLA, where she characterized the genetic pathways that regulate the molting cycle of C. elegans. As a postdoctoral fellow in the Hallem lab, she seeks to understand how mechanosensation enables soil-transmitted helminths to locate and infect their hosts. When not playing with or thinking about worms, Ruhi loves to bake, cook, and practice martial arts. 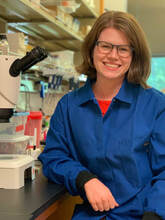 Breanna Walsh
MD/PhD Student
​
​Originally from Sonoma County, California, Bre is a graduate student in the UCLA-Caltech Medical Scientist Training Program. She earned her B.S. in Biology of Global Health from Georgetown University, where she studied epigenetics in Giardia lamblia. After graduation, Bre explored drug resistance mechanisms of malaria parasites as a research assistant at Harvard T.H. Chan School of Public Health. In the Hallem Lab, she is investigating the neural basis of oxygen response in parasitic nematodes. In her free time, Bre enjoys reading, hiking, live music, and finding new ways to bake with her sourdough starter.
​
​ 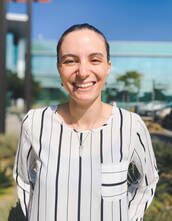 Born and raised in Dover, Delaware, Courtney earned her BS in Biological Sciences from Delaware State University, where she focused on neuroscience research. Shortly after graduation, she moved to sunny SoCal to pursue her dream of going to graduate school. Here at UCLA, she is a PhD student in the Molecular Toxicology Interdepartmental Program. She’s currently studying the role of metalloproteases in mediating skin penetration in Strongyloides. Courtney’s non-science interests are hiking, reading, and watching The Office. 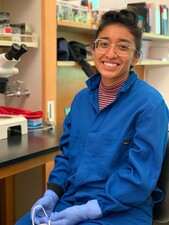 ​Born and raised in Orange County, California, Gloria is a Ph.D. student in the IMMP program of MBIDP. She earned her B.S. in Bioengineering from UC Riverside and her M.S. from Keck Graduate Institute, where she focused on the host-pathogen interactions of insects and entomopathogenic microbes. Here at UCLA, she studies the effects of widely used insect repellents on the chemosensory behavior and skin penetrating ability of Strongyloides. To keep herself happy, Gloria makes time for thrift-shopping, outdoor activities, spoiling her cats, and admiring her handsome aquatic turtle.